An einen Graphologen: „[…] Ich fühle mich geehrt und geschmeichelt mit Ihrer Nachfrage nach meiner Handschrift. Mit besten Wünschen für den Erfolg Ihres interessanten Unternehmens […]“ – Emil White, who was born in Austria, began his painting career about 1944, after being introduced to Big Sur by his friend, the writer Henry Miller, who lived in the area. White’s canvases were noted for their primitive and minutely detailed style. In 1981, he established the Henry Miller Memorial Library at his home, where he displayed his own work, paintings by other local artists and his collection of Henry Miller memorabilia. White donated his home to the Big Sur Land Trust, which continues to operate it as a museum. 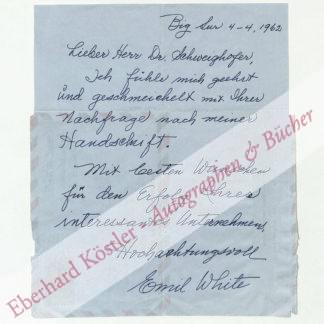