An den Kunsthändler Carl Laszlo (1923-2013) mit Übersendung einer Liste von Gemälden. „Steding made his debut in New York City during the late seventies playing as a one-man band (predominantly as an opening act at CBGB’s for bands such as Blondie, Suicide and The Ramones). During the eighties, Steding worked as painting assistant for Andy Warhol, who eventually became his producer.“ 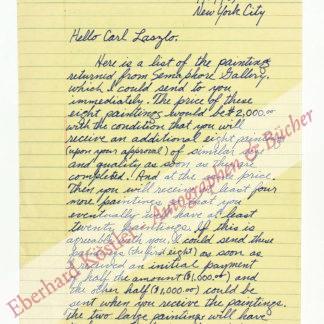