An den Geographen Otto Schlüter (1872-1959) in Halle: „[…] Permit me to solicit your good offices to bring my scientific services to the notice of your great University. For fully half a century my life has been dedicated entirely to the cause of science without remuneration or material reward of any kind. I enclose some recent prints confirming this. With high respect […]“ – James Park Thomsen gründete die Geographische Gesellschaft Australasiens: „In 1885 he founded the Queensland branch of the (Royal) Geographical Society of Australasia; he was its honorary secretary, president (1894-97) and edited its Journal. He was involved in discussions that led to the formation of the Australasian Association for the Advancement of Science. Thomson wrote well over two hundred scientific papers and was instrumental in the adoption of the zonal system for reckoning time. In 1900 the Queensland branch of the R.G.S.A. named its foundation medal after him and he was its first recipient in 1901.“ (ADB) 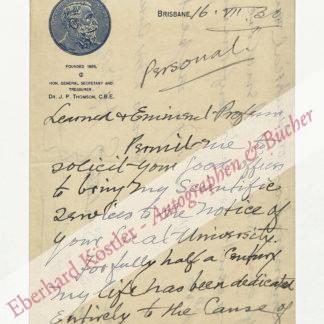