„My dear Mr. Croker, I rejoice to be assured, under your own hand, that notwithstanding the close and unhealthy weather of which we have had so much, you have at least lost no ground during the last three months. On the other hand I regret that I cannot make a satisfactory report of Mr. Pennells condition. Probably you know all that part of his medical history which is apparent to ordinary observers – viz that after suffering more or lesse for 2 or 3 months from stomach discomforts, internal haemorrhage occurred, 8 or 9 weeks ago – and blood was discharged sursum et deorsum in considerable quantity. This has not recurred. But within 2 or 3 days of the time of its happening, that train of symptoms began for which he sought my advice – i. e. he began to experience a difficulty in swallowing, or rather in getting food into his stomach. Meat, especially, was impeded in this way; it would go down to a certain spot (which, judging by his sensations, was just where the aesophagus, or gullet, terminates, and the stomach itself begins) – but there it stuck […] I hope I am not, when writing to a Brother in Law, betraying any professional confidence when I add one circumstance in his habits of life which may have had an influence in producing Mr. Pennells malady; – […] I mean a simple ulcer. Without apparently having been addicted to habits of intoxication, he has, for many years, drunk a very large quantity of ardent spirits – without seeming to be aware that he has drunk to excess, or done anything extraordinary in that way. He confessed that it has been his custom to drink from four to six beaker glasses of spirits + water daily, each containing about one wine glassful of pure spirits […]“. – Seit 1826 Fellow of the Royal College of Physicians, amtierte Thomas Watson von 1862 bis 67 auch als deren Präsident; seit 1859 Fellow der Royal Society und 1866 geadelt, diente er seit 1870 als Hausarzt der Königin Victoria. 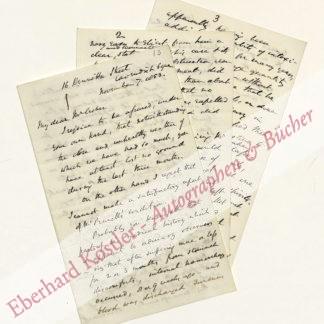