An den Schriftsteller Paul Elbogen in Hollywood: “[…] Thank you very much indeed for your most interesting comments on ‘The Track of Man’. You are certainly the first person to tell me that this was the most engrossing book you ever read in a decade […] It is indeed strange to think that you were in a French ‘detention camp’ near Toulouse and saw that sign in the snow […] I also was in Vienna in 1938 and arrived by train from Prague on a very wet night to find every lamp post disfigured by Hitler’s blackguards. […] Your hypothesis on the explanation of the sadism of the Nazis may well be true. It is still hard for me to conceive of such brutality of man to man in western Europe during the twentieth century […]” – Mit Eintragung von Elbogen. 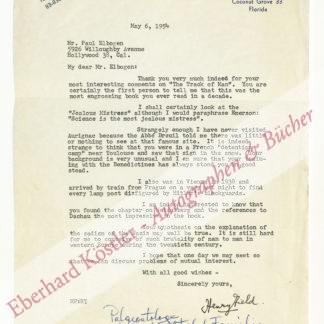