Sehr hübsche Sammlung teilweise ganzseitiger kolorierer Federzeichnungen, zum Teil mit Zirkusdarstellungen. – Das ebenfalls montierte Widmungsblatt ist an Ida Randolph Spragge (verh. Costain) gerichtet, die Gattin des Schriftstellers Thomas B. Costain, für den Ryman 1955 die Novelle „Tontin“ illustriert hatte: „Suite in Lines is a collection of 65 pen and water color sketches which I made for you. They were drawn with ink directly on paper without the help of preliminary pencil lines. Never before in my life had I felt such a deep and lasting urge and interest in doing creative work than drawing these sketches. If they should please and amuse you, I shall feel being compensated to the fullest extent. To you, dearest Ida, in deep affection. Herbert.“ – Ryman first worked as a storyboard illustrator for MGM during Hollywood’s „golden age“. In 1938 he met Walt Disney as a result of an exhibit of Ryman’s works at the Chouinard Art Institute.Walt was so impressed with the paintings that he invited Herb to join the Walt Disney Studios (Burbank). Herb went on to serve as an art director for such feature-length animated films as Fantasia and Dumbo. During the summers of 1949 and 1951, Ryman took a leave of absence and travelled with the Ringling Bros. and Barnum & Bailey Circus, living among the performers and documenting the circus in his paintings. 1953 Disney asked Ryman to render the artwork for a Disney envisioned theme park. Disney and Ryman worked non-stop throughout the weekend creating a large pencil sketch and several other drawings illustrating the project, including the Sleeping Beauty Castle, Main Street, USA, Jungle Cruise and Pirates of the Caribbean. – Vgl. D. Mumford and B. Gordon, A Brush with Disney […] Told through the words and works of Herbert Dickens Ryman. 2000. 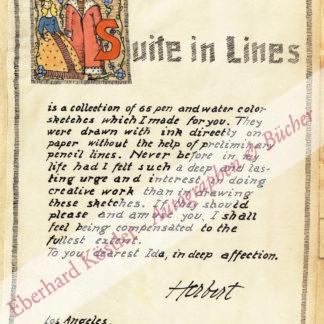