An einen Rundfunkredakteur: „Why would your project, of dealing with my childhood as I have written about it, involve any time and expenses for me? […] In general I avoid television projects, since they ask more in time and energy than they repay in artistic satisfaction or financial rewards […]“ – „After that BBC […] show I would have thought I would never go on television with my boyhood again […] Your fee of $3000 is quite generous and more than Amerivcan TV ever offers anybody, even Monica Lewinsky […]“ – Das Verfahren zur „Lewinsky-Affaire“ ging am 12. Februar 1999 zu Ende, Clinton blieb im Amt. 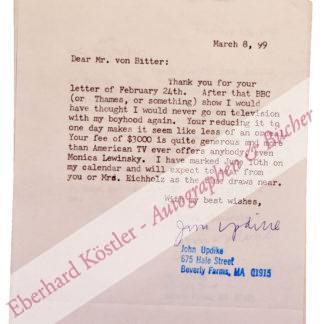